I have ambivalent feelings about New York City. 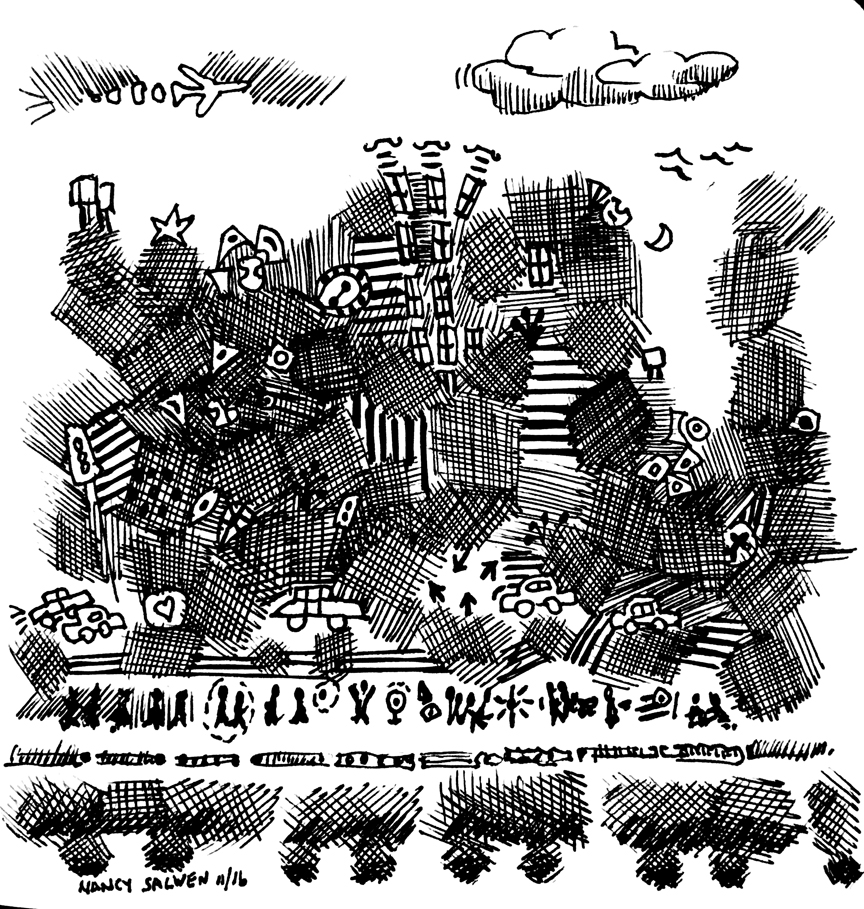 I grew up on the Upper West Side of Manhattan and enjoyed a lot about my childhood. I took advantage of living there in a way that was different from the other teenagers I knew — I was very into folk music, and though I missed by a few years the famous folk scene of Bob Dylan, Dave Van Ronk, and the like (darn), I was part of a special kind of scene.

Twice a week I went to English Country Dances at a church in the Village, and afterwards we’d usually go to a bar to sing together and drink beer. I was on a Morris Dancing (look it up) team and we toured around the city, stopping here or there to dance, and then we’d find a bar so we could have some food and sing together and drink beer. These traditions involve a lot of bars and beer drinking, as well as loud singing of raunchy songs.

I took Balkan singing classes with a woman who travelled to Bulgaria and Yugoslavia to collect the songs she taught us. We sang melodies and harmonies that were absolutely haunting and touched my soul — music from another time and place. Her apartment was full of magic for me, decorated with treasures brought home from her travels.

There were also these awesome little “coffee house” experiences — sometimes the venue was actually some place that served coffee, but usually it was a little hole in the wall theater somewhere, or a church hall, and folk musicians from different parts of the world would perform. Usually the musicians were amazing, you could sit about 20 feet from them, and you could hang out and talk or play music with them at the end.

So though I was 19 and living practically around the corner from CBGBs yet had never heard of David Byrne or the Talking Heads, and though I never went dancing at Studio 54, I was still kind of grooving there in New York. But not in a New Yorky way. The music I was listening to and that interested me, transported me out of New York — that was part of what I liked about it. Scottish ballads, English dances, Balkan Singing, and music from the Appalachians — these lifted me out of New York into someplace more livable for me.

Because I always found New York hard in a way. It was overstimulating, loud, stressful, and at that time pretty dangerous, but I was still a New Yorker. I knew the city well and I navigated myself to all kinds of awesome nooks and crannies to do amazing things. But at a cost — my temperament wasn’t a great fit. I was drawn to a small town life. (Actually, I thought I was drawn to a country life, but it turns out that I need to be within walking distance of a pizza place and a coffee shop.)

When I moved to Keene, New Hampshire at 21 I really missed the city and all my friends and family there. Now, at 58 and after 37 freakin’ years in Keene, I think I finally feel like this place is my home.

On a visit to NYC a while back, I had a realization.

You know the scene in It’s a Wonderful Life when Jimmy Stewart is running around all around looking for the people he knew and loved, and nobody recognizes him? Often when I visit the city I stay at my brother’s apartment on 86th Street, and on the way there I pass the building I grew up in, on Riverside Drive. I was friends with so many of my neighbors there — our building was like a vertical small town. Recently I pulled the car over in front of the building and got out. I asked the doorman if Ara still lived in the building — the only person I could think of who might possibly still live there, and the doorman said no. My parents are both dead, and most of my friends have moved away from NY. That’s when it hit me that New York had become a sort of ghost town for me. I thought about that scene in the movie — so dark and haunting — and had to admit that I felt that way about New York City. It was painful. And lonely. My hometown is full of strangers; my people are gone.

(The huge, important, meaningful contradiction to this is that my wonderful brother and his family all live in New York, and so does my daughter. I almost didn’t want to mention this because you might think it completely sabatages my point. Oh Well. I wouldn’t want them to read this and say, “What am I? Chopped Liver?”) BUT STILL… This is how it feels when I’m not actually with these people. This big emptiness. This ghostly loneliness. Ok. You get it.

So, recently I called up my oldest friend, Liz. We met in nursery school when we were two. She hasn’t lived in the city for years, but her mother, in her 90s, still does. We haven’t seen each other since before my son was born, and he’s 18. I asked her if I could see her and her mother while I was in town. We met up in a fancy greek restaurant that they go to after their regular monthly opera date at Lincoln Center. I can’t tell you how sweet this was. I’d always loved both of them and being with them together warmed my soul.

Earlier that same day, my brother and I went out to Brooklyn to visit with the sister of Eula Lee, the woman who babysat me every weekday from age 1-8, while my parents worked. I loved Eula in an easy, pure way. I remember her washing my hair. Singing the jingle from the Campbell Soup radio ad. Walking with me to school. Once I said to her, “I don’t know who I love more, you or my mother.” And she said, “You love your mother more.” She was pretty straightforward — my mother was not. I loved mom and she was creative, kind and loving, but she was quirky to say the least — things with her were not simple and clear. Eula brought a solid, sane, safe (and really fun) element to my childhood.

Last year I went to South Carolina for her funeral. Which is a complete and separate blog post in its own right if I get around to writing it. It was an amazing experience, and I reconnected with Virginia, Eula’s sister, who is in her mid-80s. So on this day not long ago, my brother Pete and I met Virginia in a bar-b-que restaurant she recommended, and then she took us back to her house to look at photos and meet her boyfriend. Remember, my own parents are dead — NY feels like a ghost town to me, constantly reminding me of loss and death. And now there is Virginia! She tells me that often when my parents travelled, Eula would take care of me, and that sometimes she’d take me to stay with her and Virginia in Brooklyn. Sometimes Eula would also be gone, and Virginia would be the one watching me. I had no idea! And here she was!

And then Virginia said this thing that blew my mind… 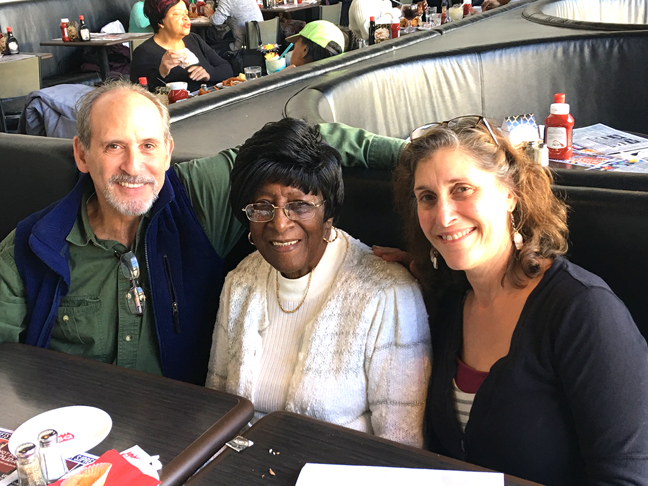 “You know, the first time we took you to church with us, you asked, “Why is everyone going like this, Eula? You thought we were crazy!” She gestures hand clapping — the kind of hand clapping that happens in a black gospel church while everyone’s singing. I WENT TO BAPTIST CHURCH SERVICES IN A BLACK CHURCH WITH EULA AND VIRGINIA WHEN I WAS A LITTLE CHILD! Not once, either! Many times! This explains SO MUCH about me! I just can’t help think that this was the seed that grew into, well, me. My career anyway. What I love most. Community singing.

After this day, I started feeling differently about being in New York. It felt warmer and more alive.

This past weekend I gave my first Fear of Singing Breakthrough Workshop in New York, New York. To people up here in Keene, it sounds kind of prestigious and upscale when I say that, which is fun, but for me it was mostly about returning with my new self to my old home town. I was nervous, and I’m not usually nervous before workshops anymore.

It’s hard to get attention in New York (probably another reason I chose to leave when I was 21) and New Yorkers, I hear, have trouble making commitments that will pin them down on a weekend (is that true?) so my workshop was small. I was worried that the participants wouldn’t have a good time and that they would think I was too touchy-feely. Or unprofessional, or unimpressive in some way. I was worried they wouldn’t buy in to the premise that everyone can sing, or that it was possible for us to create an environment of non-judgement, because in my experience New Yorkers can be kind of skeptical. (Nooooo…. really…..?)

But anyhooooo, it was great! Everyone was interested, and I think they learned a lot and had an experience that changed their perspective for the better. I had a lot of fun. Ice, broken. And this also warms me towards New York. I was hoping it would, because running workshops there is part of my business plan, and I was worried I’d find it depressing and scary. I’m excited about it now. I’ve met such nice people — there were quite a few people who couldn’t make it to this workshop but who called or emailed because they saw my fliers (thanks to Martin, the Flierman). Maybe I will meet them soon and get to sing with them.

New York is My Town

So, when I lived in New York I used music and singing as the escape I needed to manage my stress.

And now, lo and behold, singing is turning out to be a big part of what’s making New York work for me again. Kind of cool.